It has been a while since the last newsletter, and I must offer a blanket apology to you all for the dearth of updates. For a number of reasons, my schedule has not been entirely mine for the making lately. This picture is all I will say about it for now. 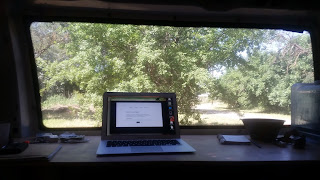 That said, here is what’s going on:

Backstory: Gibbons and I had just befriended Matthew Teardrop (the driving force of MMM) back when we started Miedlena Records. At the time, Miedlena wasn't much more than an idea, and while we thought it would be great to work with MMM in some way, we had neither the knowledge nor the blind courage to take on something so monumental. In the years since, Gibbons and I ended up joining our favorite band, as we are far better musicans than we are media moguls. Meanwhile, Miedlena managed to become something slightly more than just a goofy idea. Also, MMM recorded an album and went through the ringer with two other potential labels. The first label turned out to not really know what they were doing, and after a year of mucking about they eventually admitted as such and thankfully let us go. Shortly after that, a little dejected, I happened to meet a man well-connected in the business of rock and roll, who expressed a sincere interest in the band. We gave him some time, and after that time was spent we decided to go ahead and release the album ourselves. It has eight songs on it, runs about 40 minutes, and is entitled: “Dumb”.

Here is the cover art, by Colin Ambulance. 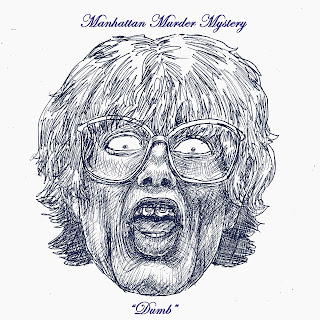 In the past, a Miedlena release has been mostly an online affair, focused on documentation and little more. It costs very little to do this, and takes maybe twenty hours of computer work. For “Dumb”, however, we must print on vinyl. Manhattan Murder Mystery is a monumental band, and vinyl is a monumental medium. It is a media platform that refuses to die. Those who love it, love it so dearly that it simply cannot do anything but continue to be relevant. Unlike digital publishing, however, vinyl printing takes a lot of time and a lot of money. So, step one for "Dumb" is to design and carry out a vinyl pre-sale. The next email you get from me will probably include a link to some kind of fundraising campaign. Fair warning.

I’m going to end this particular missive with a link. It will take you to a review of the one release already published from the forthcoming album. There is a short little paragraph for you to read, and a music video for you to watch. Enjoy.

P.S. Gibbons says "Hi", from Taos, New Mexico, where he is flexing his song-spinning and guitar-jangling for the American Southwest.
Posted by Unknown at 11:19 AM